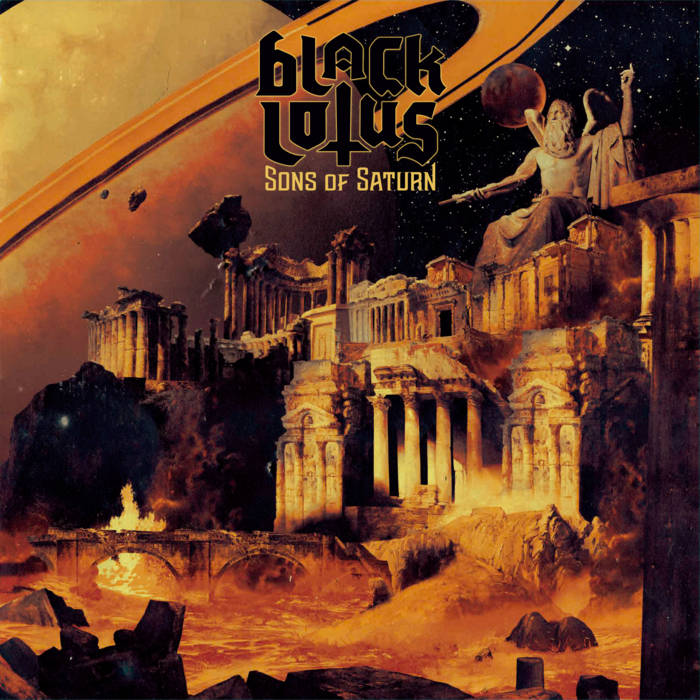 Colin M. Had my eye on this for a while and it does not disappoint. A masterful blend of heavy metal and good old fashioned doom. Powerful, soaring vocals, thunderous rhythm section and great riffs. What else could you need? Favorite track: The Swamp.

seanfromhaxor Thoughtful lyrics, devastating guitar tones, powerful bass and flowing drums. This is one of my favourite bands this year.

Frederick Jones One of the best metal albums I have heard in a very long time. You can hear their devotion in their craft. The production is off the charts. Only thing better would be a vinyl release. Favorite track: Sandstorm.

Bucky Black Lotus have unleashed what some may consider the coolest modern concoction of traditional metal and doom this year. The vocal soar with epic tone and towering volume as the riffs pummel with dynamic and rhythmic force. Mind = Crushed

𝔩𝔬𝔲𝔡-𝔮𝔲𝔦𝔢𝔱-𝔩𝔬𝔲𝔡 𝓐 sonic cacophony of dauntless dimension, the basslines alone on 'Sons of Saturn' are capable of contorting speaker cones and inciting sleepless demons to beat on floorboards all the way from the pits of perdition. Meanwhile, twin epics 'The Sandstorm' and 'The Swamp' are sourced from metal's premium stash; a combined 20 minutes of decadent, damnable doom. Favorite track: Protective Fire.

The band was born in 2015 created by former members from Barcelona based Stoner Metal act Dolmenn. After consolidating the right line-up, the band headed to the Moontower Studios end 2017 to early 2018 for the recording and mixing of their debut album "Sons of Saturn". The mastering was done by Brad Boatright at Audiosiege, Portland, Oregon.

The album achieved very good feedback though reviews and scores on the range of 7.5 to 9 out of 10, from important specialized magazines, channels, sites and online radios worldwide.

Black Lotus' sound is grounded in the diverse influences of the band members. Traditional Heavy Metal is the common factor and driving force of the band, but alternative sounds of the 90s, Stoner Rock, Doom Metal and post metal genres are also elements in its crucible. Their compositions are embracing all those influences without limitations or dogmas.

Likewise, lyrics are eminently symbolic, expressing a dystopic of view of the society and the world. Classic mythology, occultism, personal experiences and personal visions are the sources for their obscure poetry.

“(…) You can certainly hear hints of Black Sabbath, Paradise Lost, Solitude Aeturnus, and Mercyful Fate – a few of the band’s prime influences- yet this serve only as points of reference for your humble music reviewer.   Surely, Black Lotus stands strong on their own terms.” Doomed & Stoned (USA)”

“(…) The fact that this is the debut album of Black Lotus is also the biggest challenge. It seems to be a difficult task to surpass this. But perhaps not impossible: 88/100” zwaremetalen.com (Netherlands)
“(…) Black Lotus have demonstrated an amazing level of understanding when it comes to creating Metal music. Hopefully, this will be a trait that follows them through a long and successful career: 9/10. AC Rock Reviews (UK)

"(…) It is more than obligatory for all lovers of sounds with a strong atmospheric charge of high voltage Doom Metal and without closing its sound to various elements that enhance its sound." TNT Radio Rock (Spain)

“ (…) a right mix of Black Sabbath, a sprinkle of epic sound and a bit of the fresh vibe of bands such as Black Label Society: 81/100.” Hardrockheavymetal (Italy)

“(…) Heavy, dark and laced with fiendish melody, Black Lotus perfectly encapsulate the era they love and, as love letters go, Sons Of Saturn should be considered an epic doom metal debut of considerable prowess: 8/10” WorshipMetal.com (UK)


Sons if Saturn is available on digital platforms worldwide.

RECORDED AND MIXED BY JAVI FÉLEZ AT MOONTOWER STUDIOS, BARCELONA, BETWEEN DECEMBER 2017 AND JANUARY 2018

- This album is dedicated to our families and friends. A long awaited dream coming true with their help, love and unconditional support. -

BLACK LOTUS releases their debut album 'Sons of Saturn' October 19th 2018.
The band was born in 2015 created by former members from Dolmenn.

After consolidating the right line-up, the band headed to the Moontower Studios end 2017 to early 2018 for the recording and mixing of their debut album "Sons of Saturn". The mastering was done by Brad Boatright at Audiosiege, Portland, Oregon. ... more

Bandcamp Daily  your guide to the world of Bandcamp

Featured sounds by K.Spark and WIZDUMB, plus Basi joins the show to discuss his latest release.